Xfinity vs AT&T Comparison In 2022 – The Verdict Is In 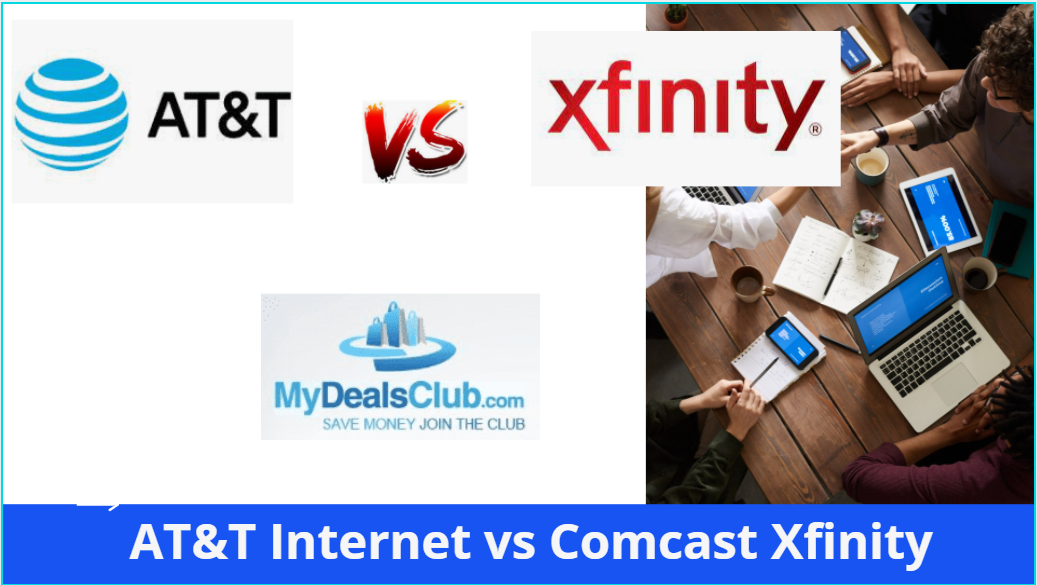 I’d say you’re in good hands if you’re looking for a home internet subscription and your options are AT&T or Comcast Xfinity. Both AT&T’s fiber network and Comcast’s cable network provide high-speed Internet to a large chunk of their coverage areas, and both companies rate pretty highly in terms of customer care.

Comcast Xfinity is a cable TV company that offers both contract and no-contract options. Xfinity TV provides both traditional and cloud DVR options. You may use your DVR to record programmes and then transfer them to the cloud. This allows you to view your programmes on the road, which is very useful while travelling.

While AT&T U-Verse boasts one of the largest channel counts of any pay TV provider, it is also one of the most expensive. Its most expensive package offers over 550 channels to choose from. It also features over 200 HD channels and an excellent collection of foreign programming.

Here’s how AT&T and Xfinity plans compare when it comes to popular add-on costs. These costs are typical with internet providers, and they might result in a higher monthly payment.

For a list of all the top AT&T deals and discounts be sure to check out our page for updated deals. For the first Contract-Free month, the AT&T Fiber Internet 500 internet package is $45/month. However, the price subsequently jumps by 44% to a final cost of $65. So, over the course of two years, the average cost of internet is $55 a month. When comparing prices, keep in mind that Fiber Internet 500 includes the following fees:

The cost of WiFi equipment is $10 per month.
Let’s see how it compares to Xfinity:

Compare XFINITY from Comcast and AT&T- Internet at a Glance

For the first year, the Xfinity Performance Pro+ internet package costs $49.99 per month. However, after that first term, the price increases by 40% to $70. When averaged over two years, the cost of Xfinity internet is $60 per month.

There are other costs associated with Performance Pro+ as well:

Not only do Xfinity’s stated speeds outperform AT&T’s, but so do the actual performance speeds.

The way both firms supply their internet is the cause of the significant speed discrepancies. While Xfinity provides internet via a cable, AT&T mostly provides it via DSL. DSL is often 3 times slower than cable internet.

It should be noted, however, that AT&T provides fibre internet in a limited number of places. This might significantly improve your overall internet speed.

The majority of AT&T’s plans have a monthly data limitation of 1 TB, with the exception of the Internet 1000 plan, which has unlimited data. You may pay $10 for every 50GB of more data after you’ve reached your monthly data limit.

All of Xfinity’s plans, including the Gigabit and Gigabit Pro, have a 1 TB data restriction. If you go over your monthly data limit, you may pay $10 for each extra 50 GB of data, much as AT&T. With any plan, Xfinity also offers the option of paying $50 per month for unlimited data.

Who is AT&T Internet Best For?

AT&T internet is the greatest option for people looking for internet, phone, and television services. If you only want internet, AT&T isn’t going to be able to provide you with a good bargain. Of then, if it’s the only alternative available in your region, it’s not a bad one. AT&T also has special bundles for online gaming. For myself and a number of my friends, this is a critical factor.

The amazing thing about AT&T is that they have a deal with DirecTV, which means you can receive a lot of television channels for a cheap fee. They’re fantastic for a lot of things, but that’s about it.

Who is Comcast Xfinity Best For?

For those looking for lightning-fast internet, Comcast Xfinity is the preferable alternative. When compared to AT&T’s internet, Xfinity offers almost double the speed for the same price. To be honest, it’s not even a fair comparison.

Not only does Comcast provide excellent internet service, but it also offers excellent bundle options. For a very low price, you can receive quite decent television, phone, and internet bundles. While these plans don’t exactly match those offered by AT&T, they’re not far behind.

If you watch Netflix, Hulu, or any other streaming service often, Comcast Xfinity is the service for you. Its streaming capabilities greatly exceed AT&T’s. Check out our a rundown of the Best Internet Service Providers For 2022 to see how Xfinity and AT&T compare

What If I Already Have My Own Modem Or Router? Can I Use It

Yes, you certainly can. In fact, if you’re contemplating Xfinity’s service, you may want to do so since it will save you money on monthly rental costs (though we’ll be fair to Xfinity and say that their equipment is really world-class). Here is our list of all the top  Verizon Fios Compatible Routers but many of these can also be used for Xfinity or AT&T

You should be aware that you can only obtain assistance from your ISP for router difficulties if you use their router, which is important to remember since troubleshooting may be a big nuisance if you can’t reach a technical support person on the phone to assist you.

You’ll also need to purchase a modem or router that works with the service you’ve chosen; Xfinity and AT&T should be able to provide you with a list of suitable items. After that, you may get the stuff you desire from any reliable supplier.

Everyone despises their internet provider, so it’s no wonder that the ISP industry’s customer satisfaction rankings aren’t very high. Nonetheless, AT&T and Comcast Xfinity are two of the top performers in this category. In 2020, both received above-average scores from the American Customer Satisfaction Index, putting them in the top three of all ISPs polled.

AT&T ended two points ahead of Comcast last year and three points ahead of the overall category average with a score of 68, although that score was a percentage point lower than it was in 2019. Comcast, on the other hand, witnessed an increase of 8% in its score from 2019 to 2020, perhaps indicating good momentum. When the 2022 report is out, we’ll see whether the pattern continues.

So, unless you really want download speeds of 2000 Mbps, I strongly advise you to look into AT&T.

We understand that everyone despises Comcast, but there isn’t much to this. AT&T ranks somewhat higher on a variety of customer satisfaction indicators, but not by enough to be statistically significant.

Verdict Time Which is Better Overall?

Both provide fast internet speeds at a reasonable price, as well as identical internet data limits and strong packages. However, thanks to its HD services and superior customer service, AT&T beats Xfinity. So, unless you really want download speeds of 2000 Mbps, I strongly advise you to look into AT&T.

Let’s save you some money with Comcast’s finest modems for Xfinity. The best Xfinity-approved modem for any download speed is the ARRIS S33.

AT&T usually demands a one-year service contract. For an additional $10 per month, Xfinity offers a no-contract alternative. If you choose Xfinity, you may sign a contract that lasts up to two years.