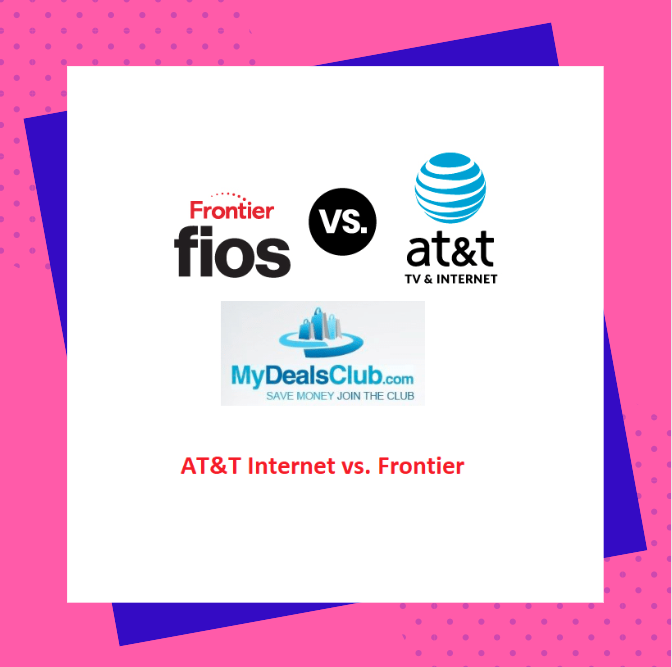 CLICK HERE FOR – Order Frontier Internet today and get up to a $100 Visa Reward Card. Shop Online Now

Enter your address information to see plans and pricing available to your home.

Frontier Communications and AT&T Internet are some of the top internet providers in the nation. Frontier Communications offers service to 29 states while AT&T offers service to 21 states. As well as offering fiber internet, AT&T also provides fixed wireless while Frontier, on the other hand, provides copper internet in certain regions. Both providers also offer TV and phone bundles in addition to high-speed internet plans. Although the two providers offer similar internet speeds, a number of differences exist between the internet plans that customers can put into consideration to make a more informed decision on the best plan for them.

AT&T Internet is the second biggest DSL provider in the United States. Its Fiber plans are accessible to approximately 25.1 million people, while its fixed wireless service is accessible to 2.7 million customers. The customers have the option to bundle their internet service with phone and/or TV.

Frontier Communications is the fifth biggest DSL provider in the United States, offering service to 33.3 million customers in 29 states, with California, Connecticut, and California having the greatest coverage. In addition, Frontier is the fourth biggest fiber service provider in the United States, as it provides fiber service to 10.9 million customers. Based on where you reside, you can have access to Frontier’s copper service as it is only present in 7 zip codes. You have the option to bundle your internet with phone and/or TV.

When it comes to internet speeds, both providers offer relatively similar speeds. Both companies provide fiber connections that reach speeds of 1,000 Mbps. Frontier and AT&T both supply DSL internet which is more widely available.

In general, regardless of if it is their DSL or fiber offerings, both companies have various plans that have the same top internet speeds. Neither AT&T nor Frontier outshines the other.

Both Frontier and AT&T offer enticing deals to lure customers to purchase with them. You can expect deals such as giveaways, free installation, low introductory rates and more from both providers. Our top AT&T Promotions and Frontier Fios Deals offer a great range of bundle deals for 2022 worth checking out.

Which of these services are ideal for my needs?
The most suitable service for your needs will be dependent on the type of service that you use more intensely: is it TV or the internet?

Frontier Fios options are more ideal for heavy internet users as there are plans for high-speed service. Besides, Frontier’s options normally don’t have any bandwidth caps. Consequently, you won’t have to ration your data usage as you head to end of the month.

But when it comes to Frontier’s TV offerings, they aren’t very strong on their value. Quantum TV doesn’t offer a wide range as compared to DirectTv or other TV providers. Besides, though the signup bonus of an Amazon Prime year-long subscription is beneficial, it doesn’t offer access to live TV. Our top DirecTV Promotions are all found here.

But with Frontier, you still get the $100 gift card when you sign up regardless of the plan that you select. Hence, you have the option to buy an alternative TV service with the money, at least for some time.

AT&T TV deals offerings are quite strong on their merits as customers get access to multiple TV services regardless of the plans that they select. Though there is a significant overlap between the options provided by U-Verse TV, DirectTV ( read our Directv Review for and indepth view ), and AT&T TV, when taken in full, the services are comprehensive.

Besides, AT&T’s options are more advantageous if you are looking to bundle your cell phone service into your TV and internet service. Though you won’t essentially be getting a deal, you’ll get to enjoy the simplified billing process.

Data, Cost, and Value for Money

In regards to the monthly cost, Frontier easily trumps AT&T. Frontier’s basic plan is essentially two times cheaper than the AT&T base plan. However, when it comes to the higher-tiered internet plans, the price gap gets slightly smaller but Frontier is still more favorable in terms of affordability.

Installation and Other Fees

You can save on equipment rental fees in case you have your own equipment that is compatible with either of the provider’s services. In case you want to use AT&T’s equipment, then you will be charged a small monthly fee. But Frontier, on the other hand, lets you use their equipment free of charge.

If you are a power user, then you don’t have to worry about data usage with Frontier. Frontier doesn’t have data caps on any of the internet plans that they offer. Therefore, this means that you can game on one screen while you still catch up on Game of Thrones before the much-hyped final season. But after all, your attention is perhaps better spent directed to one thing.

Frontier’s coverage spans a big section of the country with a major caveat. A majority of their coverage area doesn’t have a big population.

AT&T coverage is also relatively wide and they have a good presence in various areas that are densely populated. This gives them an edge over Frontier and thus they win in this category.

Frontier provides plans with various combinations of internet, TV, and phone. Bundles are personalized and are much more affordable than purchasing the different services a la carte. When it comes to bundles, AT&T sets the standards. Offerings are many and customers who bundle services are able to deals on services such as the internet and the mega TV provider DIRECTV.

The giant powerhouse telecom company, AT&T, won’t triumph in the battle of customer reviews when matched up against many other companies. However, in this category, Frontier has a slight win.

Some of the most prevalent complaints against Frontier include dropped service and extended downtime and long delays from customer service.

AT&T is also accused of unresponsive customer service. If you take a look at their complaints you will discover that most customer complaints are about getting slower speeds than advertised.

AT&T Internet and Frontier Communications have similar speeds. Both companies have speeds reaching 1,000 Mbps. But Frontiers base plan is 6 Mbps which is slower than the 10 Mbps AT&T’s base plan.

Frontier provides unlimited internet for every internet plan they offer. A majority of internet plans have a data cap of 1TB, however, customers have the option to pay for unlimited data which is priced at $30/month or they can bundle their TV into their internet service to get unlimited data at no additional cost.

While Frontier doesn’t need an agreement for its internet plans, AT$T Internet needs a one-year contract and the charges are $15/month for each of the remaining months if a contract is terminated early.