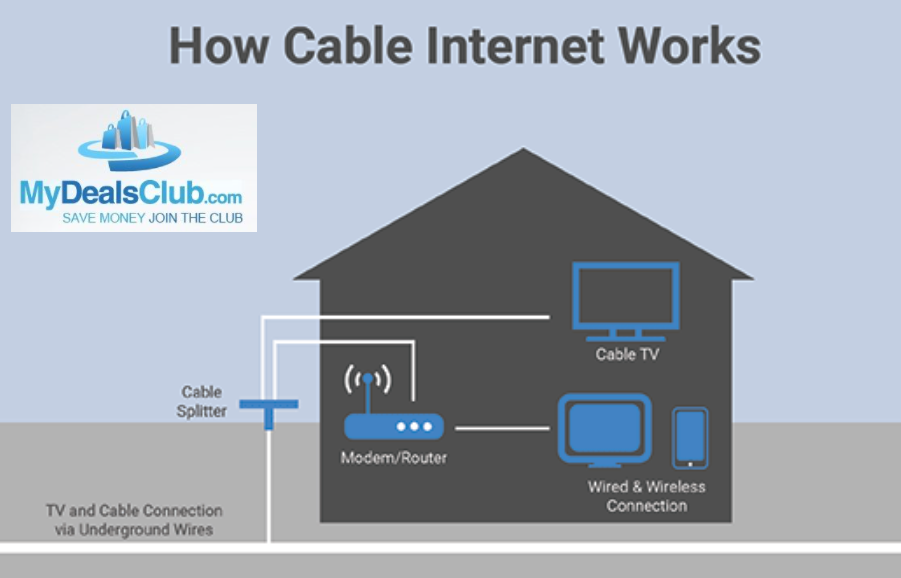 What Is Cable Internet and How Does It Work?

Cable has long been one of the most popular broadband internet options, owing to its dependability and fast upload and download speeds. Cable internet, on the other hand, requires the installation of cables in your company or house.

Because laying cables for the required two-way connection is a time-consuming and resource-intensive operation, cable lines are not available everywhere – particularly for broadband in rural regions. Cable providers have not made the same investments in low-density regions as they have in cities and suburbs. This is because the denser a population gets, the more consumers they can service and the more infrastructure expenditure is justified.

When you have cable internet, you share the same cable network as any of your neighbours who have the same internet provider (ISP). That implies your internet connection will drop down significantly during peak use periods – when a large number of people are online.

DSL, on the other hand, does not have this problem, therefore your speed will be more consistent.

What is Coax Cable Internet?

Coax is a kind of cable that is used to transport data, the internet, video, and voice communications. The dielectric insulator in a coax cable helps to reduce signal loss by combining an aluminium and copper shield with an outer plastic jacket (see below).
Many companies rely on coax for internet connection because of the same dependability and speed that enables it to successfully carry phone and television signals.

A popular cable connection used by many carriers is coax cable internet. Coax internet works by delivering a data signal to the modem at your location through your coax connection. The data is sent through the Ethernet connection between your modem and your computer, providing you high-speed internet access.

What Makes Cable Internet Different from Other Internet Connections?

We can identify cable Internet from other types of connections now that you know what it is. To begin with, cable Internet connection is a significant improvement over dial-up, which is notoriously sluggish.

When it comes to high-speed or broadband Internet, cable Internet stands out since it is based on a cable TV network. The distance between you and the local cable TV service provider’s CMTS has no effect on Internet speed.

Other high-speed connection options include DSL, fiber optics, and satellite, in addition to cable Internet. DSL (Digital Subscriber Line) is a service that connects you to the Internet using underutilised phone lines. This configuration, unlike dial-up, does not disrupt your phone service. However, as you go farther away from the provider’s switching station, the Internet speed decreases.

Fiber optic Internet service is a relatively new kind of broadband Internet service, and its infrastructure is currently being built. It operates in the same manner as cable Internet, except instead of copper, glass fiber is used within the wired lines.

Finally, a satellite Internet connection transmits data from a space satellite to a dish in your house. Satellite Internet is wireless, unlike cable Internet, which utilises coaxial cables to transfer data. Check out DSL vs Cable vs Fiber for an indepth look at the differences between each one .

Whether you’re streaming, browsing, or gaming, internet speed is an essential factor to consider when choosing a provider or service. There isn’t much of a difference between cable and fixed wireless internet in terms of speed.

Fixed wireless and cable both provide internet rates of 25 megabits per second (Mbps) for downloading and 3 Mbps for uploading, according to the FCC. DSL internet providers, that link your house or company through phone lines, usually do not provide these speeds.

Many cable and fixed wireless providers provide download speeds ranging from 10 Mbps to 100 Mbps or even 1 Gbps, depending on your provider.

To a degree, the download speeds of cable, satellite, and fiber-optic internet are comparable. Satellite transmissions, on the other hand, are less direct, which means they may encounter interference during transmission.

Fiber upload speeds may vary from 50 Mbps to 2,000 Mbps, while fiber download speeds can reach over 300 Mbps. Although fiber networks are growing in popularity, they are still not as widely accessible as cable internet. Cable remains an excellent method for most individuals to access high-speed internet because of its direct connections and consistent transmission.

Although cable is not the fastest internet service available, it is the most widely used. The typical speeds provided by cable internet choices vary from 20 to 100 megabits per second (Mbps), which is one of the major benefits of satellite versus cable internet: cable offers greater top-speeds. However, this is just an average; cable can really sustain greater rates. Find out whether your requirements call for a CAT 6 or CAT 7 cable, or possibly a CAT 7 or CAT 8 cable. To begin, read our CAT6 versus CAT 6A Ethernet cable review or our CAT6 vs CAT 6E Ethernet cable article to learn about the similarities and differences.