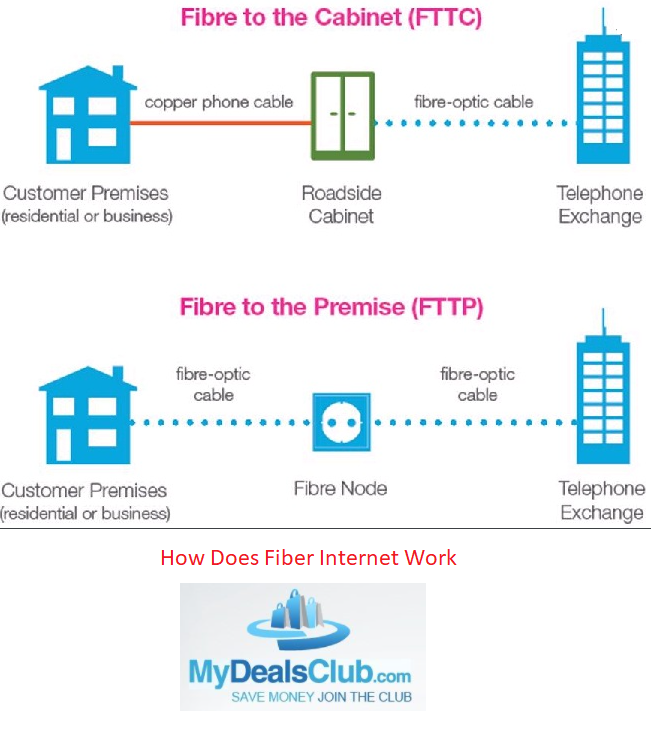 What Is Fiber Internet and How Does It Work?

To download and upload data at the speed of light, fiber optic cables consisting of super-thin strands of glass (fiber) are used.

Two kinds of cable are used in a fiber optic network. Single-mode cable contains a tiny core or centre that transmits light in a straight path, making it ideal for long-distance data transmission. Multimode cable has a larger core in which light bounces about; it’s ideal for sending data across small distances, such as inside a city.

The network, also known as FTTH (fiber to the house) or FTTP (fiber to the premises), may reach your home directly. It may even come to a halt at the kerb or anywhere between your house and the internet provider’s facilities. To bridge the “last mile,” the internet service provider (ISP) may utilise coaxial cable Internet , DSL Internet , Satellite Internet or fixed wireless technologies.

Check out DSL vs Cable vs Fiber for an indepth look at the differences between each one .

Although fiber broadband is not available in every area in the United States, it is becoming more widely available. According to the Fiber Broadband Association, the service is currently accessible to 46.5 million houses, or approximately 37% of all residences in the United States, and 20.5 million families subscribe to it. According to the report, fiber broadband overtook DSL as the second-most-common form of residential internet connection in 2018, with cable internet being the most popular.

Transfer a large amount of data in a short amount of time.
You can transmit huge quantities of data swiftly and smoothly since fiber broadband is the fastest internet accessible. This means that whether you’re viewing a Netflix movie at high speed or video chatting with relatives in Asia or Europe, your connection will be smooth and fast (provided they are on fiber too).

Technology of the Future
Because fiber-optics transmits data using light rather than electricity, the frequencies utilised are considerably higher, and the data capacity is much larger. The fiber-optic cable is composed of glass or plastic, and unlike metal cables, it is not subject to electromagnetic interference. This enables data to be sent across long distances without degradation. For all kinds of communication transmissions, interference and energy loss are the limiting variables, and fiber optics manages these problems considerably better than other means of transmission. As we outgrow outdated copper-based infrastructures, more and more of our world will be linked through fiber optics in the future. Nearly all houses in cities like Brooklyn, New York, and Kansas City have already been connected to fiber networks.

Related reading : The top 100 gadgets that changed the world

What Is The Speed Of Fiber Internet?

Although fiber internet may reach speeds of up to 2,000 Mbps, most fiber companies only provide 1,000 Mbps.

To put that in context, Netflix only recommends 25 Mbps for streaming 4K content on a single device. However, supercharged gigabit rates (1,000 Mbps) allow you to multitask on several devices at the same time. That way, you and everyone else on your Wi-Fi won’t have to worry about your internet connection slowing or cutting out since it’ll always be humming along nicely with plenty of bandwidth.

Fiber is fast enough to keep up with intensive internet usage and a variety of sophisticated online activities in practise. It can handle 4K streaming across multiple devices, large file downloads, content uploads to cloud servers and social media accounts, online gaming, Zoom teleconferencing, connecting numerous smart home devices, and pretty much anything else you can throw at it.

The upload speeds of fiber internet, in particular, set it apart from other kinds of broadband. Customers using cable and DSL have asymmetric speeds, which means their upload rates are considerably slower than their download speeds.

Because most individuals download much more data than they post, the speed disparities are acceptable. Fiber providers, on the other hand, provide symmetric upload and download speeds, which is ideal for video chats, vlogging, and cloud computing.

What Distinguishes Fiber From Other Kinds Of Internet?

The major distinction is that unlike other kinds of internet connections, fibre does not need electricity. It works by delivering light via a fibre glass core.

The Internet has progressed significantly over time. Here’s a quick rundown of the most common kinds of connections still in use and how they work:

Dial-up, which is much less prevalent now than it was 20 years ago, makes use of existing copper telephone lines. When dial-up connects, it utilises the same audible frequency as a landline, which is why you hear a succession of beeps and sounds. Also, since they share the same line, you can’t use the phone and the internet at the same time.

For downloading and uploading, dial-up connections have an average speed of approximately 56 Kbps (0.05 Mbps).

Everyone benefits from fiber internet, and it may even be affordable. Is fiber internet the best option for you? Yes, we agree. Because fiber internet is based on modern technology, it is more dependable and quicker. Even if you don’t require 1,000 Mbps download speeds, a 100 Mbps fiber internet service will certainly provide you with fewer outages and overall quicker speeds than a 100 Mbps cable or DSL plan.

ultrafast FTTP connections have a minimum download speed of 300Mbps. However, in the United States the majority of fiber connections are superfast FTTC, with download rates of at least 30Mbps. However, the exact speed you’ll receive will be determined on the distance between your house and the street cabinet or telephone exchange.